Today David and I went to the Dr. for my 16 week checkup. They did the basic checkup, and we got to hear the heartbeat again (well I did, he was too busy talking to hear it). We also started our free classes that are offered to us, where we get to meet with a small group of other ladies/couples that are due around the same time. It was really nice. I know of two of them, and it went really well I think. As we got ready to leave, I wanted to verify with the front desk that I am in fact scheduled for my ultrasound next month like they'd said. As it turns out, the 15th is just the next class/normal 20 week checkup, and I didn't have my ultrasound set up. So here I am anxious thinking that since I didn't get it done earlier that now it'd be later before I'd get to have it done. Low and behold, it's a week earlier! So I go back on the 8th for my ultrasound, and should (most likely) find out the gender! So freaking excited!
Afterwards we headed to Dave's for some hot dogs with our Canadian friend who is in town. It was nice to get to spend a little bit of time with him before he heads back next week. That, and really? What's better than a nacho dog? Then we had to stop at the lab to get my blood taken (3! vials) in order to do the prescreening test thing that they do. So here's hoping for the best!

Also, mom and I have been working on our registries since Renee is trying to get everything started for the baby shower that they want to do in October. So I've been hunting around, and talking with mom's to find out what are the things that I'll actually need verses just things that we want, and I think I've got a pretty good list going. I think it's just about done, but I figure I'll wait to post them until we know gender just in case there's anything gender specific we want to throw in there. :)
And finally, because several folks on Facebook kept asking for a pic of the baby bump so far, here it is. 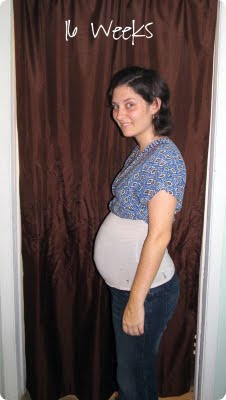 Email ThisBlogThis!Share to TwitterShare to FacebookShare to Pinterest
Tags: baby

So obviously I've got a lot of time on my hands with not having a job, or classes to go to and whatnot. So as a way to relieve the stress of pregnancy and give me something to do during the day, I've turned to reading. Reading everything, from news articles online, to magazines, to the Trueblood series and the list goes on. However, amongst those, I've been reading several pregnancy books as well, such as one that my mother in law got me at a garage sale, that counts the process of development week by week. That one is pretty neat, but each week is only like 2-3 pages long, and about 50% of the those don't apply to me because it's discussing if you've got certain medical issues that don't concern me. Another I've been reading as each week passes is What to Expect When You're Expecting. This one is pretty decent, and again, is a little helpful. Additionally, I have several sites that I check with each week as well. However, in my search for new reading material, I came across a book by Jenny McCarthy, who I've always enjoyed her brute honesty and inappropriateness anyway. Today I picked it up from the library, and just started it about 20 minutes ago, and am through 4 or 5 chapters already, and all I can say is, WHERE WAS THIS THE WHOLE TIME? It is everything that I've been wanting and asking for. Women in general tend to lie and sugarcoat pregnancy. I am here to tell you, it sucks. Plain and simple, it's been an awful ride for me. And finally I have found a book that is not only super entertaining, albeit a little too blunt for some folks, but 100% honest. She gets down and dirty about it all, and I really appreciate it. So for any of you newly expecting mothers, I highly, highly suggest reading this for a more realistic approach to pregnancy. It's called Belly Laughs: The Naked Truth About Pregnancy and Childbirth. Get it now!
With Love: Erin Pocock at 10:42 PM No comments:

So today I am 14 weeks, and beginning my second trimester. It's hard to believe that I'm already a 1/3 of the way through. The nausea is seemingly getting a bit better, but early mornings still set my stomach off pretty badly. On the 18th David and I go back to the Dr.'s and start our first pregnancy class. Unfortunately, they won't be doing another ultrasound until our following one on September 15th, which means we won't be able to find out the gender until I'm 20 weeks along. But hey, better than never.
We are still waiting to hear back anything about whether or not David will get an interview for the higher position. I'm really hoping it works out though. It would make a HUGE difference in our life to be making more money and for him to have a normal schedule for once, and he'd still be in the same department, but would be able to take more classes again.
In other news, my Medicaid finally kicked in, so no more paying $340 each month for my Dr.'s visits, and $50 every two weeks for my nausea pills. That is a huge relief. And as of today, we are all setup with WIC and got our first checks. So that will be a nice little addition as well to somewhat help with groceries.
With Love: Erin Pocock at 1:59 AM 2 comments: