Yikes! My big girl is 17 months going on 20! She's got so much sass, it's crazy!
This month we celebrated Daddy's second Father's Day, did a day at the pool with Aunt Carrie, and went to Seaworld! We did lots of arts and crafts, playing outside (in between nasty storms) and learning new tricks! 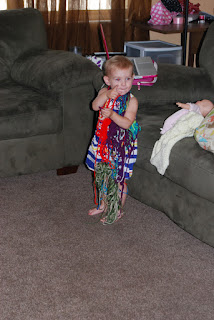 I don't have her current height and weight* but I imagine that she has finally passed 21 lbs. and will hopefully be able to get her weight one of these days. *Edit: I bought a digital scale so that we can stop having to use my in laws' whenever we're there, and she weighs 20.5 lbs. She still fits into her size 5 sandles, but her size 5 tennis shoes are starting to get a little bit snug. She can wear a pair of 5.5 tennis shoes that one of my friends gave her. She has outgrown most of her 18 month footy pajamas and now wears mostly footless. Her tummy is still tiny though and still fits the 12 months pants/shorts. And she has 11 teeth!

Daddy (acting like a bull about to attack Sophia)
Sophia throws her baby doll towards daddy and steps back
Daddy: Did you just sacrifice your baby to the bull?
Sophia (matter of factly): Yep! 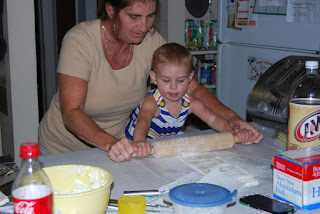 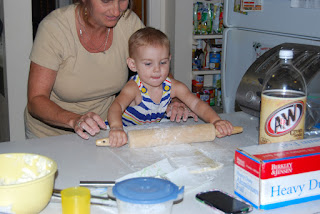 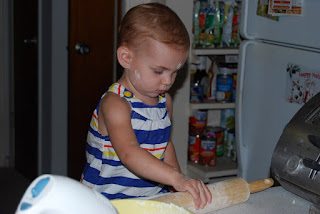 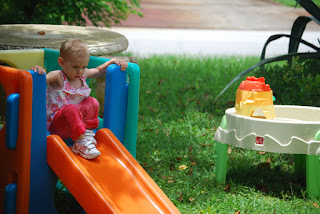 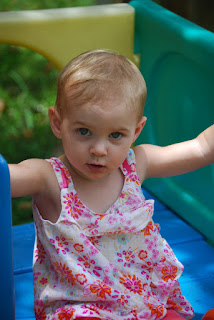 Other Words Learned Since Last Month:

She'd spent two weeks consistently letting me know when she needed a new diaper, and would grab her diaper to show me and then go stand by the bedroom door (where we change her at) and wait for me to come change her diaper. So after two weeks of that, I decided that maybe this was her way of telling me that she wants to potty train (which I didn't expect to start doing until around 2 years). So we bought a potty and on the morning of the 24th, I woke up and asked her if she wanted to try to go potty, and she said yes. I asked if she was done trying, and she shook her head no, so I told her I'd be right back and was going to get her diaper ready in the next room. I walked into the room and heard the toilet play music! She'd peed! Then I passed her wipe and she wiped! Then we went out to the living room and she nursed for a bit. After she finished nursing, I asked if she wanted to try again, and she said yes, and she peed AGAIN! Woo Hoo!!! My baby is so freaking amazing and smart! I just can't believe it! 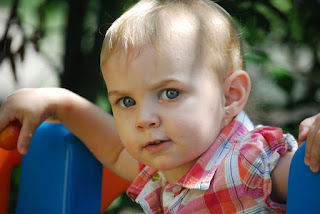 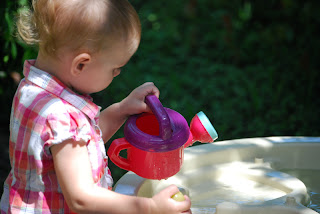 For Father's Day, Sophia and I went to Clay Z in Merritt Island, and she painted him a pretty coffee cup all by herself! She was so excited and had so much fun! We also got him a Seaworld funpass so that he could come with us next time! 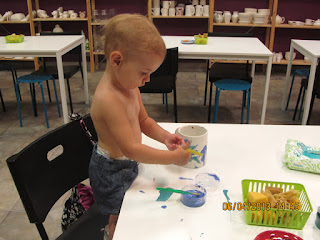 We took a trip to Seaworld, this time with Daddy! Auntie, Dustin, and Mary came along too! It was a lot of fun! Sophia went on her first ride to see the penguins! 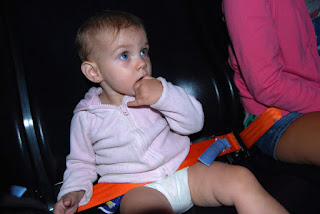 (Waiting for the ride to start) 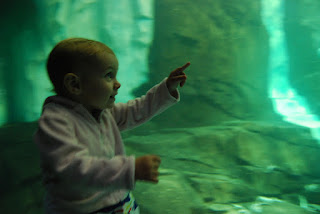 (Chasing around the penguins) 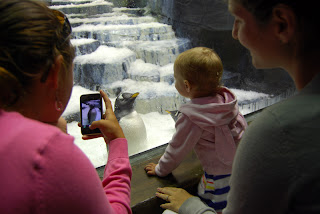 (Kissing the penguins through the glass) 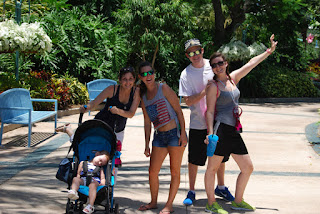 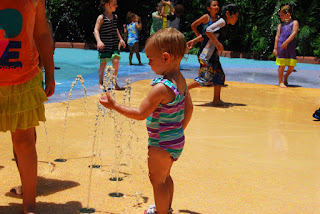 (Playing in the fountains in Shamu's Happy Harbor) 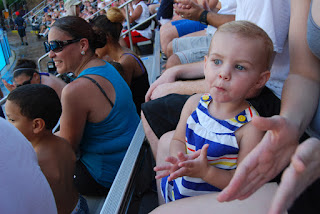 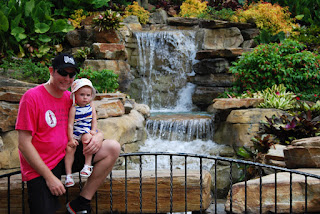 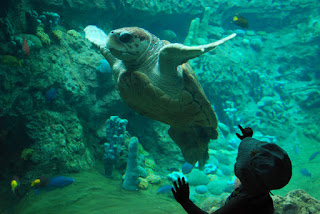 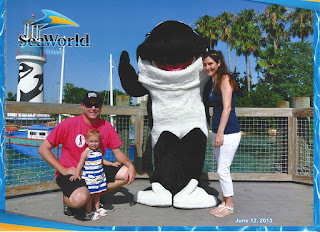 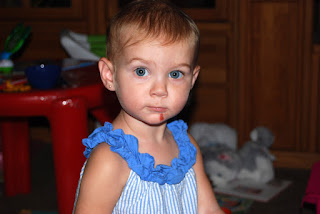 (My sweet girl fell on my parents' rock drive way and cut up her face :/ But she took it like a champ!) 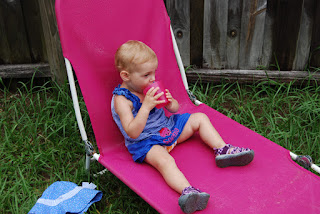 (Drinking from her big girl cup)

We also got to go swimming at the YMCA around the corner with Aunt Carrie! It took a little time to warm her up to it because the water splashes are loud and a little hard but she ended up loving it and not wanting to leave (despite the nasty storm coming in). 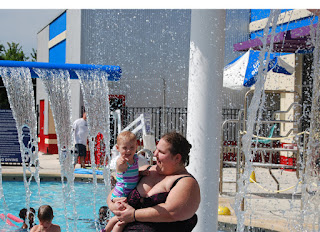 She also really learned to do some tumbling!
Doing some of her favorite tumbles...somersaults!

And she loves to sing! Her favorite song is Fall Out Boy's "My Songs Know What You Did In The Dark"
My little future pop star! 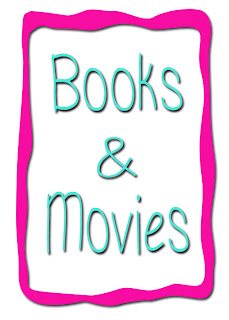 I frequently see people toss around the word "family" so easily. They think that blood means you are "family." I disagree. Family are the people who love you unconditionally and fight to protect you. They are people who remain in your lives through the good, the bad, and the ugly. They are there for you in your deepest pains, and are the ones helping to raise you back to greatness. "Family" are not people who use their own agendas and try to control your life. They do not only "love" you when you're doing what they think you should be doing or want you to be doing. They don't stop "loving" you when you make a mistake. They support you and help you grow from your mistakes. They don't take advantage of you. They don't abuse you (mentally, physically, sexually or otherwise). They don't call you terrible names, and spread lies about you. They don't tell you that "you'll never amount to anything" or that you're a "waste of money." Blood does not equal family. FAMILY are the people who are put in your life to love and support you and better you, to be a support system in your life.

I have "family". They are toxic, hateful people who call themselves "Christians" but live their life on a daily basis full of hate, hypocrisy and ignorance. They have been cut out of my life for a purpose. I grew up having that kind of conditional "love" and hateful words in my life, which only made me a sadder, more depressed, insecure person. Luckily I found my REAL FAMILY. The ones who love and accept me, and helped me to grow and learn to defend myself, and protect my own FAMILY. For instance, my daughter will NEVER be put through that sort of hate in her life from the people who are in place, meant to love and protect her. I WILL PROTECT HER. Anyone who tries to get in the way of that will also be dead to me. Harsh? Perhaps. But this is what FAMILY does. They love and protect. Thank you to those that I have accepted in my life and are my family..and my friends. And thank you to the "family" that taught me exactly who I don't want to be, and for making me a better person because of it.
With Love: Erin Pocock at 11:31 PM No comments: